I have a book! A book whose pages are filled exclusively with my words! (except the little bit concerning section 77 of the design, patents and copyright act of 1988, according to which I assert my right to be identified as the author of the work, which I still thought was pretty cool.)

Earlier this year, I sent an unsightly wad of poems to Luke Wright, who – in a momentary lapse of reason – was stupid enough to like them and then offer to publish a small selection of said unsightly wad as part of his Nasty Little Intro series. Nasty Little Intros are little 16-page pamphlets published by Nasty Little Press, showcasing the work of early career poets and spoken word artists. Mine is number 9 of 10. I have not called it ‘hashtag 9’.

It has 6 poems in it, some of which I’d read at gigs before the book came out but most of which I hadn’t (until I went to Latitude, where I read them all many times into people’s unsuspecting ears). The poems are ‘Breaking Cobs’, ‘Since Records Began’, ‘Surprise’, ‘Role Play’, ‘Dad Joke, for two voices’, and ‘The Measurement Trick’.

If you want to get your hands on what the back cover of the book describes as ‘a taste of a glittering career to come…the perfect accompaniment to train journey or long hot bath’ (their words, not mine) then you can order copies from the Nasty Little Press website. It’s just £2, or 33.3 recurring pence per poem. If I sell enough, I too may one day be able to afford a long hot bath or a single train journey. 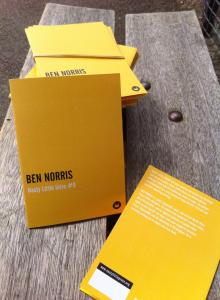