The world hadn’t ended yet.

The royal baby was still a royal secret.

It was but a humble Tuesday.

Well, you’d remember it if you went to the inaugural SCRIBBLE KICKS, the first ever Writers’ Bloc event at mac birmingham.

To counterbalance Grizzly Pear, our performance-poetry night at the Bristol Pear, I wanted to put on a page-poetry and prose friendly evening of readings in a relaxed and marginally less-bawdy atmosphere, where the emphasis is entirely on the words. Originally Scribble Kicks wasn’t going to have a headliner (and future events, about which I’m currently in discussions with mac (ding! for pretentious managerial-speak points), probably won’t), but it happened to so neatly coincide with the publication of two excellent collections of contemporary British poetry that it would have been foolish to turn down the opportunity to happily marry the two. Abi Curtis’s The Glass Delusion and Luke Kennard’s A Lost Expression are both published by the Man-Booker shortlisted Salt, and it was a privilege to welcome the authors to the cafe-bar at mac to launch the books and read their new work.

Scribble Kicks is nevertheless still all about supporting new and emerging local writers, so there were plenty of open-mic slots available, which provided a platform for an eclectic and delightful range of readings from Writers’ Bloc  regulars, mac‘s own ‘Future Poets,’ undergraduate and MA students at the University of Birmingham, and entirely new faces (to be most encouraged!). I’m very keen to see the event become a place where Birmingham’s writers meet to share work or works-in-progress more formally, drawing on the good work done by Apples and Snakes with their Poets’ Place initiative at Central Library. Keep your eyes and ears peeled for the next edition, which I’ll write about on here, as well as on the Writers’ Bloc Facebook page and mac Birmingham‘s website. You can follow me on Twitter, and Writers’ Bloc and mac are also on there. 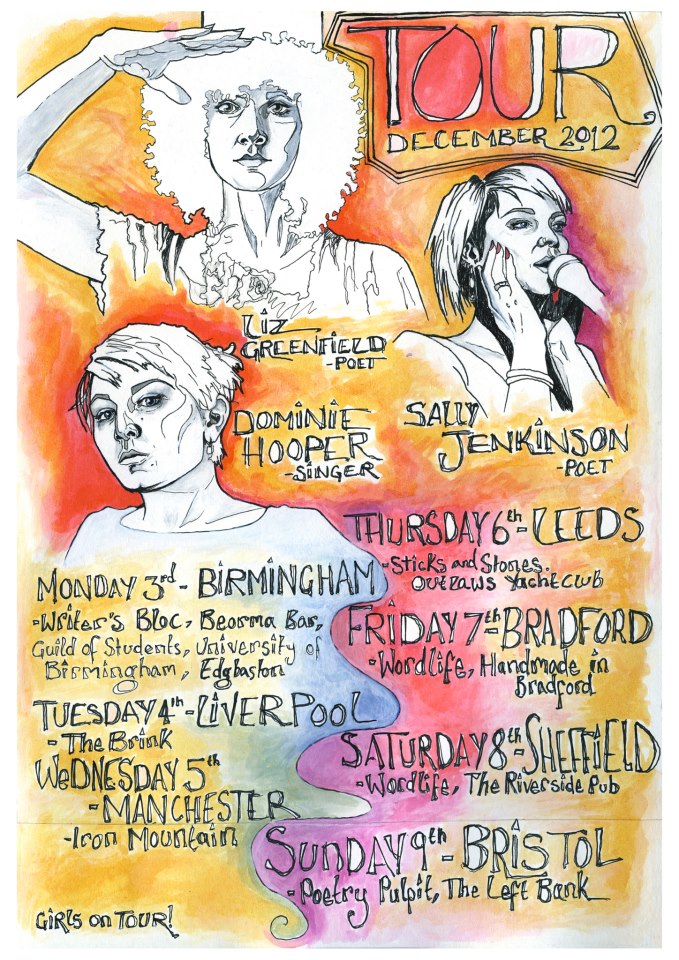 It won’t for most, but for 12 lucky people, it certainly will! On the last Monday of the autumn term, I organised one of the most last-minute gigs in the history of gigs that anyone has actually called a gig. Not only was it called a gig, however, but it was part of a tour…”Girls on Tour”, to be precise. The girls on said tour included the wonderful Sally Jenkinson, a fine spoken-word performer and big-dog at Wandering Word who I had the all-too-brief pleasure of meeting at the Bristol Poetry Festival in September, Liz Greenfield, another excellent poet, and the extremely talented singer-songwriter Dominie Hooper. Seeing an endearingly ramshackle Facebook event page declaring an endearing vague tour of the north with certain dates yet to be filled, I decided to think like a southerner, declare anything from Rugby upwards the ‘north’ and invite the girls to perform in the Beorma Bar in Birmingham Uni’s Guild of Students. Due to the fact that all this happened about 3 days before the date we hit upon, the audience turn out was small. Did I write 12? ha! Can’t you people spot a comic under-exaggeration? Well, it was 12. But my god it was good. The intimate atmosphere, and the fact that, of those 12, half live in my house, leant the evening a generous cosiness, as if I’d invited the three performers into my front room. Sally was great, at turns deeply personal and hilarious, and it was fantastic to finally see her on stage. Liz’s poems were often bizarre, challenging, terribly unPC (therefore also hilarious!), and somehow managed still to contain pockets of breathtaking imagery and metaphor. And Dominie’s performance was simply gorgeous, both musically and lyrically. Of the modest selection of merchandise available from the girls, our house went home with a copy of Liz’s pamphlet, Nobody’s Uncle, and 2 copies of Dominie’s EP, Run It Over, both of which you should buy, now (links are above). Now.

For all the semi-stressed dashing around, it was unquestionably worth it.

So remember kids; if someone asks to read poetry and play music in your pantry in front of paying audience with 10 minutes notice, say yes instantly.

Last Tuesday I was lucky enough to be invited on to VoiceBox, a spoken-word radio show on Burn FM, hosted by Elisha Owen and James Dolton, who, unlike Troy McClure, you may actually recognise from previous poetry posts. I was one of two guests alongside James Grady, a fantastic musician and comic performance poet. VoiceBox has hit upon a great structure, and Tuesday’s edition took in live and studio-recorded spoken-word tracks, live performances from Mr. Grady and I, some on-the-spot writing, and a fantastic debate spawned by their ‘contentious question’ of the week, which this time concerned the benefit(s) of slam poetry to the wider scene: a particularly relevant one considering my last post!

You can listen to both last week’s show, and the first edition which featured Jenna Clake and Mark Watson, on the VoiceBox SoundCloud page.

The following day saw the first 2012-13 instalment of the formerly low-key Writers’ Bloc open-mic night, now re-branded, re-booted and re-kicked up the proverbial arse as Grizzly Pear, with a swanky logo (well, a logo), and a pro head-liner for each event. I’ve been thinking up and organising this night for quite some time, so I was a little nervous and frantic as kick-off approached. But cometh the hour, cometh the silly fluorescent braces, and everything went swimmingly. On the night, I likened the experience to watching a child who you’ve raised and trained compete at sports day, the result of which is totally beyond your control. But in truth I was very much in a position to mess things up, as compere/host! I could’ve inadvertently poisoned Clayton Blizzard with an underdone Mexican Burger (before the Bristol Pear mobilises its lawyers, I’d like to say that the burger was fine), I could’ve killed someone with a loose electrical cable, I could’ve mispronounced a poet’s name, or done a (further) disservice to the Eminem song I was already bastardising! But, alas, the evening was a roaring success – described by one review as “dynamic, varied and thoroughly entertaining” – and I was genuinely overwhelmed by the positive responses from the audience during and after the event. Bristol-based folk-rapper Clayton Blizzard rounded off one of the most consistently high standard open-mics I’ve ever seen with a brilliant, humorous and profound set.

I’d like to extend my thanks to everyone that came and supported the event, from legends of Writers’ Bloc’s recent history (Sean Colletti) to legends of the academic Creative Writing circuit (Luke Kennard); from legends of the Birmingham spoken-word scene (Lorna Meehan) to legends of the current Writers’ Bloc cohort (too many to name). You know who you are, and so do I, plus where you live, more to the point. Joking aside, it was enthusing to see so many more unfamiliar faces than familiar ones at Wednesday’s event, which suggests that the poetry and spoken-word community might actually be expanding as quickly as I hope it is, to include people other than my immediate friends and course tutors!

I’ll see you at the next one, won’t I? Good. It features the apparently-unbeatable UK-wide Slam Champion Vanessa Kisuule, and it’s happening on Thursday 25th January. Whack it in your diary. Not write. I said whack.